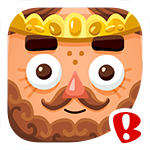 Seabeard is a role-playing video game where the player is following the footsteps of Seabeard the pirate as a captain who manages and rebuilds an island. The game is created by Hand Circus and published by Backflip Studios and is available for the iOS and Android platforms. It can be downloaded for free from the Apple App Store and from the Google Play Store. The iOS version can be played on the iPod Touch, iPhone and iPad.

Seabeard was released on December 10 for iOS, 2014 and on March 13 for Android. It uses the freemium business model.

Although the game is free to play, players can use their iTunes/Google accounts to make in-game purchases of game currency to help buy currency for in-game items. Seabeard requires an Internet connection to play (3G or WiFi).

Players may also choose to connect with friends on Game Center so any friends with the game will be identified as Seabeard friends.

There is a Tutorial which occurs at the beginning of Seabeard to help players learn how successfully play the game.

The gallery below is an example of the Tutorial which can be seen when starting a new game slot.

Retrieved from "https://seabeard-game.fandom.com/wiki/Seabeard?oldid=13954"
Community content is available under CC-BY-SA unless otherwise noted.